Replacement Windows and Doors in Calgary 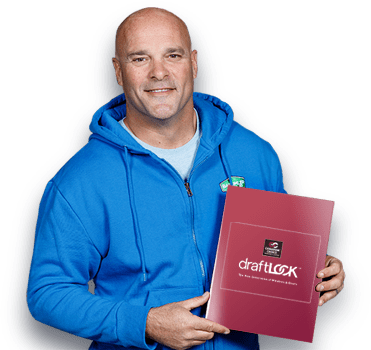 HGTV Host and #1 Expert in Quality Construction and Renovations 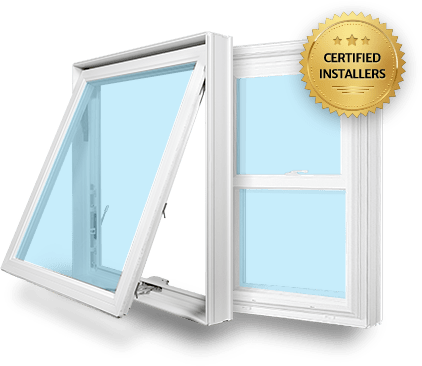 Our experienced and licensed trained in-house installers and representatives are here to deliver you the best of energy efficient window and door replacements. Get leak-proof, impact-resistant, thermally insulating, and secure windows and doors at Canadian Choice.

Endorsed by Bryan Baeumler, a home renovation expert, we put your needs first with professionalism and quality workmanship while delivering the highest standard of products and service to our customers at LESS of a price.

As a window & door manufacturer AND installer, we provide the most extensive coverage options for ALL Canadian Choice-made products.

Custom Design for Any Home

Choose from up to 40 unique styles and upgrade to ANY colour.

With revolutionary DraftLOCK technology, save UP TO 30% on energy costs.

More than 3000+ positive reviews on HomeStars, over 1,000,000+ windows and doors installed and nearly 100K satisfied clients across Canada.

A dedicated Calgary representative will lead your project from A to Z. 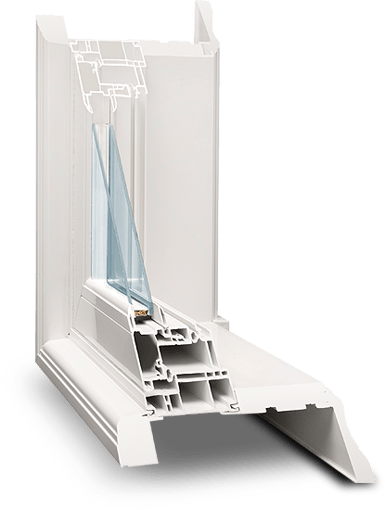 Canadian Choice Windows and Doors’ rigorous quality control before, during, and after production work to ensure that all our products not only meet industry-grade standards, but exceed them. Our double and triple sealed welded glass frames, as well as insulated and super-efficient sashes, provide your window with the sturdiness and usability it needs, alongside a quality guarantee of many years to come.

If you’re unsure of what to do next, our expert representatives are here to help. Choose Canadian Choice Windows and Doors Calgary and learn more about our exclusive window and door features and limited-time offers today! 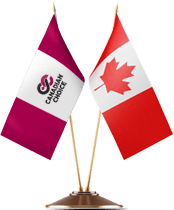 Proudly serving Canadians for over 30+ years, the Canadian Choice Replacement Windows and Doors team has always prided itself on providing clear, comprehensive solutions designed to meet your home’s unique needs. No matter the home, our team can custom-design your products upon request, your satisfaction is our top priority.

Our Calgary team works with you by listening to and addressing your concerns. We maximise your home’s potential by analysing your windows and doors’ lighting, energy efficiency, security, insulation, and other key features. Contact your Calgary representative today to find your ideal home renovation solution.

We Manufacture.
We Install.
We Service.
Product and Customer Service Satisfaction Guarantees Included 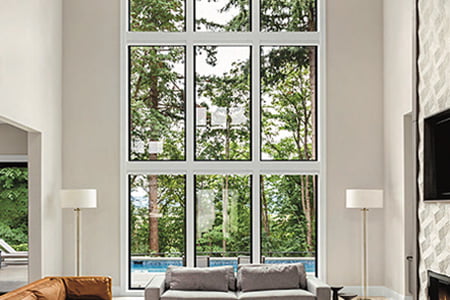 A great solution for larger windows, the slimmer frames and mullions on the draftLOCKTM Slim Contoured Series has a glazed surface area that allows more light into the room while maintaining a great view of the outdoors. 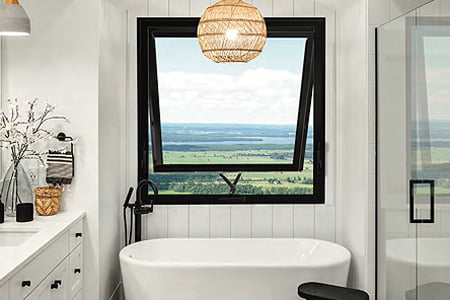 This is our triple glazed window solution, with the same the slimmer frames and mullions on the draftLOCKTM Slim Contoured Series. The Plus series is reinforced and designed with superior weight bearing features for greater durability and long-term performance. A top Energy Star performer with an industry record R-value and Most Efficient of 2021, this window series guarantees a 25% greater energy rating for your home. Hello Canadian Greener Homes Grant! 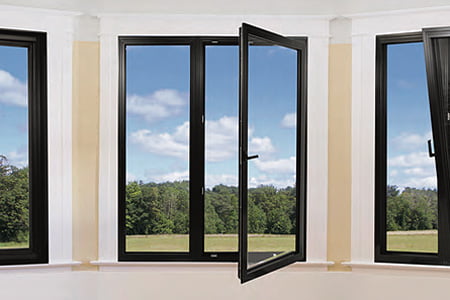 Do you want to be the cool kid on the block? The Euro Series has the latest technology and style for modern homes. The Euro Series window tilts and swings open up to 180 degrees for more air flow control, greater outside views, and they are so easy to clean. 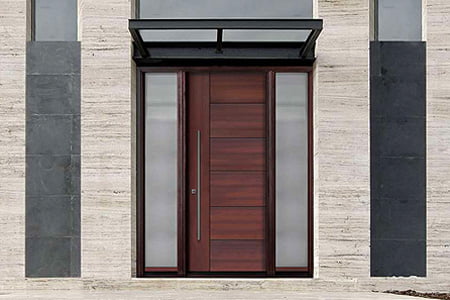 Our exterior doors are manufactured in Canada using high quality materials for ultimate durability and energy efficiency, which maximize your home’s curb appeal and market value. We offer a variety of additional sidelites and specialty shaped transoms. 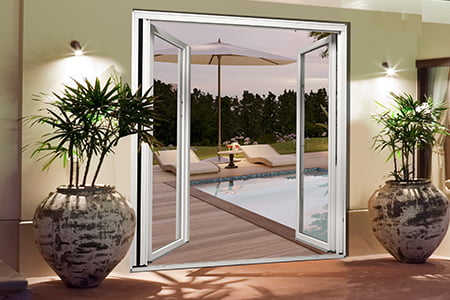 Our Patio Doors are available in different styles including tilt and turn, bifold, sliding, and stacking.

Learn more
Working directly with homeowners in Calgary and communities including, but not limited to: Okotoks, Cochrane, Airdrie, Chestermere, High River, Olds, Innisfail, Red Deer and many more! 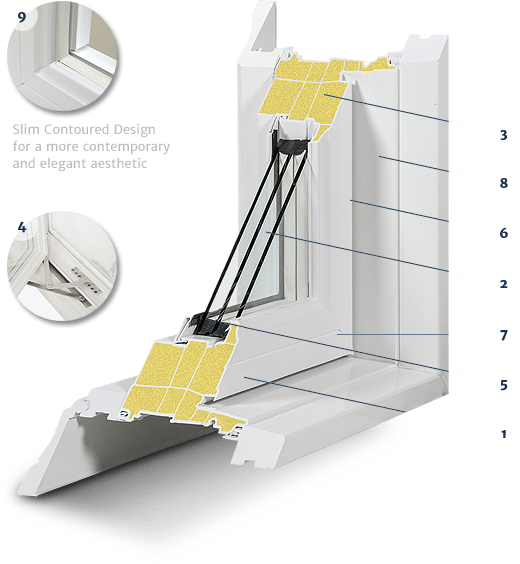 Windows and Doors —
Get More for Less

With custom architectural moulding, double or triple-sealed welded and glazed window frames, and scratch-resistant door panels, along with impact-resistant and sound-proofing design, get the ultimate window and door performance package with our DraftLOCK series.

No matter your home, your representative will discuss the best design options for you in detail and ensure that we deliver on the quality you deserve. Whether it’s a compact awning bathroom window or a big, bright, and beautiful architectural window, our experienced home renovation team is up to the task.

Now with DraftLOCK’s Low-E coating technology, reflect heat during summer and cold during winters for a more cost-efficient and cozier home, no matter the season. Choose Canadian Choice Windows and Doors Calgary and learn more about our exclusive window and door features and limited-time offers today!

Our windows and doors are made with an advanced ASTM-approved acrylic system that eliminates unattractive rubber strips, which deteriorate over time, and securely bonds the sealed glass unit to the sash.

Foam insulation will increase the thermal efficiency of the window.

Superior quality hardware increases the durability of your windows and doors.

Constructed with the highest quality lead-free uPVC, our windows are UV resistant and will not fade, discolour, warp, crack or peel.

For increased strength, all frame and sash corners are fusion welded throughout. 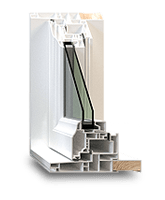 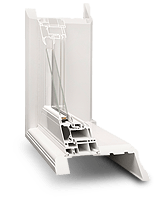 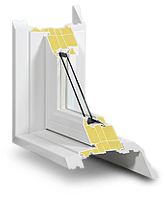 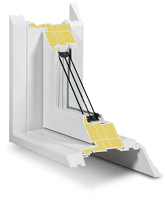 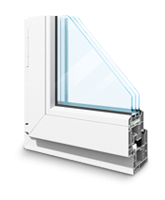 Transform your home from ordinary to extraordinary with our new Coloured & non-glare textured finishes. Available in a wide array of colours as well as custom-matched colours for your very own personalised look. 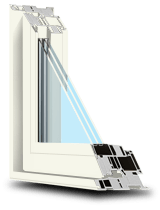 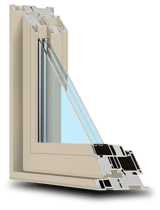 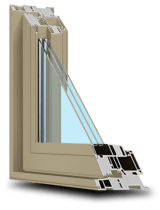 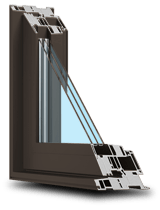 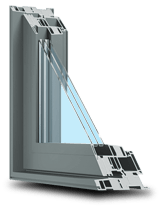 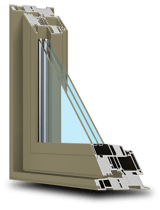 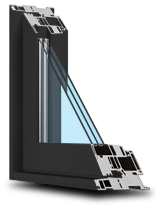 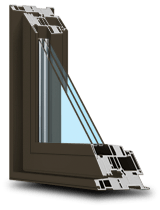 DraftLOCK Windows are definitely one of the most attractive and energy efficient windows on the market. Built to last and backed by an industry leading warranty, these windows are truly a great investment that will enhance the value of your home for years to come. 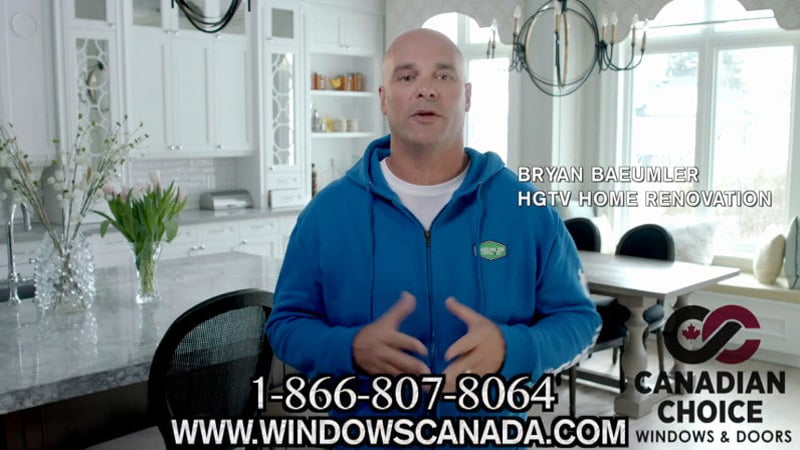 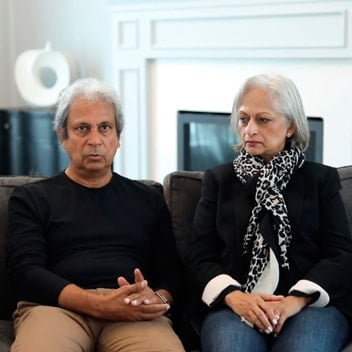 Amit and Tisha, Oshawa, ON 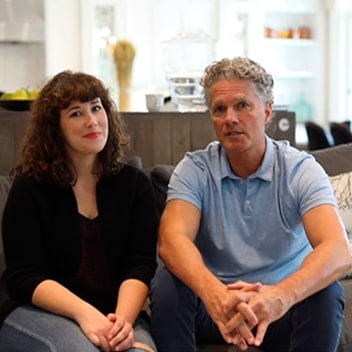 Sam and Liz, Toronto, ON 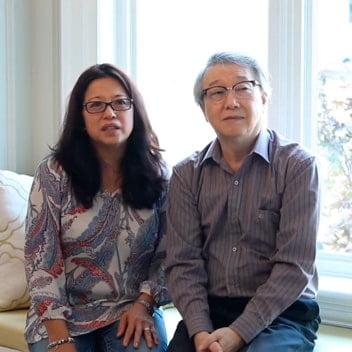 We thank all the staff for replacements of all our windows and replacement of the sliding door and new door and Window. Was a pleasure working with Alexey our Representative and Alex and Simon our installers. They did such a great job. Noticed right off that the windows are air tight and the doors work wonderful. Would recommend this company. This is the second time we have used them for replacement of windows for our property's.

Of all the people I’ve had to deal with for my home renovations, Tony D was by far the best. So pleasant to deal with. Very knowledgeable, understanding and easy to talk with. Any issues resolved quickly and easily with Tony. All questions asked responded to very quickly. He’s wonderful! Thank you Tony!!!

Recently had 11 new windows installed and very pleased with the service and product. Igor was project manager, and from the first time we met he was very knowledgeable, extremely responsive, answered every question and clearly delivered. The installation teams were so impressive, efficient and fast, with no sacrifice to attention to detail. Work space was cleaned every day. We did compare options and will say Canadian Choice demonstrated a real want for the business. No problem recommending Igor and his team. Wishing we had done more windows.

From the start with our sales rep Joe W. to installation was a perfect experience. Great knowledge from both sales and service teams! We are very happy with all our new windows and doors! Highly recommend this company!

Really outstanding service from the moment the sales rep came in all the way to the installation. Highly professional and respectful. Addressing every issue . I would like to thank especially the installation team, they were beyond awesome in their job, so efficient, they cleaned everything , professional and were patient with all our questions. One of the windows when it was being installed was hard to lock and unlock . The installer immediately asked for someone from their factory to have a look at it and they came and fixed it . I rate this company 5 stars as their service was just far and beyond. You will never be disappointed.

As seen and heard on:

Window and Door Installation Financing Made Easy
Energy-efficient replacement windows and doors for every family.

With more than 30+ years of experience delivering quality home renovation projects, we’re here to direct your project from A to Z. For everything from quotes and consultation to design and modelling, as well as installation, we’re here to help you navigate through the world of home renovation.

Now with Canada’s Greener Homes Grant, cover up to $5000 of your home’s window and door retrofitting costs today to help save both the environment and your wallet.

We believe that every Calgary family should have access to durable, energy efficient, and affordable replacement windows and doors. Explore our comprehensive financing options with 0% financing solutions and low payments, OR DON’T pay until 2024. 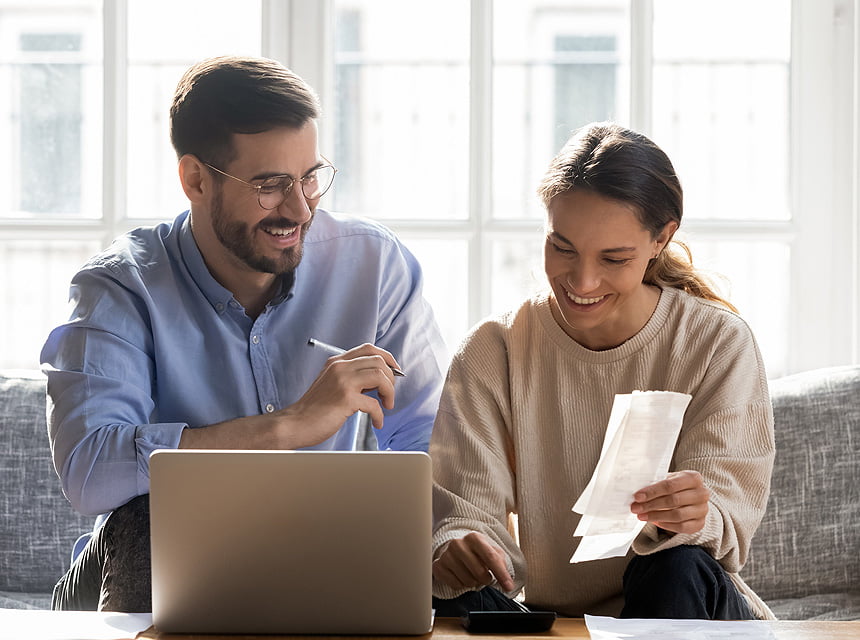 Quality Windows and Doors
In Calgary

Customer service has always been a cornerstone of the Canadian Choice identity. With a 9.4/10 average customer rating on HomeStars, we’re committed to your satisfaction not only in theory, but in practice.

Schedule your very own personalised FREE quote and NO obligation consultation at your convenience. If a manufacturing or installation issue ever inconveniences you, our team is here to help. Our LIFETIME transferable warranties make you feel secure in your purchase on ALL Canadian Choice-made products. 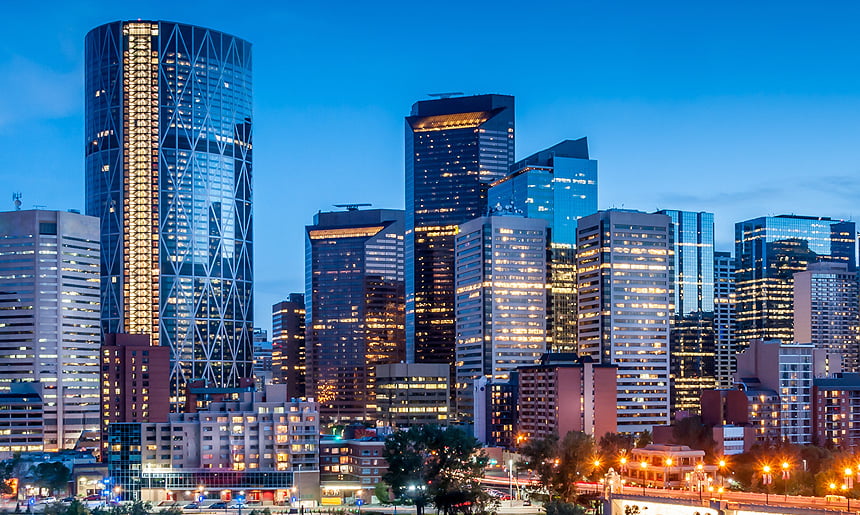 At Canadian Choice Windows and Doors, our custom-designed products are here to accommodate your home. Our DraftLOCK window series brings you top performance with style to match.

Find what works best for your home with our extensive catalogue or visit our brochure for the ideal window and door series. As Calgary’s best window and door manufacturing AND installation service, we won’t rest until you're satisfied. Learn more about our industry-leading warranties and flexible coverage options today!

With the help of our insulating extra-thick frames and Low-E coating technology, trap and redirect harmful UV rays for a long-lasting, safer home.

Find out how you can save up TO 50% OFF your installation costs with Canadian Choice Replacement Windows and Doors.

We’re transforming Calgary, one window at a time. Get up to $5000 off of your home’s window and door retrofitting costs with the Canada Greener Homes Grant. Consult with one of our dedicated Calgary representatives regarding your eligibility and maximize your savings today!

Calgary is a major city in the province of Alberta at the confluence of the Bow River and the Elbow River, bordering the Rocky Mountain Foothills and the Canadian Prairies. In addition to housing a progressive economy, the city also features regions of astonishing nature.

Calgary is the third largest city in Canada with a population of 1,306,784 citizens, a number 5.5% higher than that of 2016. More and more citizens are choosing to invest in private homeownership; consequently, Calgary locals occupy 502,301 private dwellings as of 2022.

As a whole, residents of Calgary depend on local services in order to help them secure and maintain the home of their dreams. As one of the most trusted service providers in the city, Canadian Choice Windows & Doors remains one of the most responsible, professional, and reliable window and door replacement companies in Calgary, and is dedicated to the needs of each resident individually.