More than 50% of home owners say that their energy bills can increase by as much as 100% during summer because the heat means they must rely on air-conditioners to stay cool. While this may be the most convenient way to reduce temperatures inside your home, it is also possible to do so by using your windows as effectively as possible instead. Below are three ways in which you can put your windows to work and reduce your summer energy bills.

1. Open Your Windows During Cooler Times of the Day

The rise in popularity of air-conditioners has resulted in many people forgetting just how effectively open windows can cool a home down as well. During summer, many parts of the country experience cooler temperatures and even cooler breezes during the early mornings and evenings – both of which can reduce the temperature inside a home by as much as 10 to 20 degrees. Opening windows during these times of day will enable warmer, stuffy air to escape and cooler air to enter your home. Once the cooler air has entered your home and the outside temperatures start rising a little later in the day, windows can be closed until the evening when the mercury begins to drop again.

High-reflectivity window films or tinting products are not only effective at improving privacy levels in a home; they have the ability to prevent as much as 99% of the sun’s heat and harmful UV rays from entering the dwelling as well. Older window film products had to be as dark as possible in order to be effective, which resulted in them preventing a lot of light from entering a home. However, many newer alternatives don’t have to be nearly as dark to be effective, which means that they allow light to enter your home without the accompanying heat. If you prefer the option of solar screens, these mesh-like devices are known to intercept as much as 70% of the sun’s heat before it can enter your home. 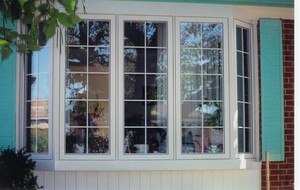 3. Make Use of Blinds or Shades

If you are renting a property, chances are you may not be allowed to install window film to help reduce energy bills. However, when used correctly, blinds or shades can be just as effective at keeping a home cool with their ability to prevent a lot of heat from entering through the windows. To ensure that these devices are effective, they need to be installed as close to the panes as possible. If you would like to boost their efficiency level even further, use dual shades that are  white on the side facing the window and darker on the inside.

In cases where you would like to reduce energy consumption even further, installing energy-star rated windows can help you achieve this goal. Contact Canadian Choice Windows today to find out more about how these windows will be able to help you save as much as possible on your energy bill each month.